The Physiological Effects of Monthly Massages


Sure, it feels great to pop in and see a massage therapist every now and then. It’s a great way to pamper yourself and relieve stress during a particularly crazy time. Self-compassion and the idea of splurging on yourself for once, otherwise known as “Treat Yo-Self,” means that it’s actually really great for you to spend a little time on self-care.
However, have you considered regular, monthly massage appointments? Besides having one day set aside each month, to treat yourself with a relaxing spa session, you will actually start to see some physiological effects of regular massages as well.
Here are a few short-term, and long-term ways you may start to notice your monthly self-care trip is benefiting your health.

After Three Months of Routine Visits to Your Massage Therapist:

Lowered Anxiety and Stress Levels: Even after your first massage, you will start to notice that you feel more relaxed, which can be a major plus if you suffer from stress and anxiety. When our bodies experience stress, we tend to tense up our muscles, which leaves our bodies feeling fatigued and sore.
Just one massage helps loosen up these muscles, increase blood flow, and lower stress and anxiety. Breast cancer patients have even reported feeling less depressed and less angry when they incorporated regular massage into their schedule.
Reduced Chronic Back Pain: If you are suffering from the debilitating problems associated with chronic back pain, you know how much it can cut into your daily routine and leave you feeling frustrated, in addition to the pain you’re already experiencing.
A study found that after 10 weeks of regular massage, people experiencing chronic back pain felt less discomfort, and even needed fewer painkillers to manage their symptoms. Cut down on the number of trips to your medicine cabinet with regular trips to see your massage therapist.
Help with Insomnia: Massages increase your serotonin levels, which aides in your ability to fall asleep, and stay asleep. You may find yourself relying on sleeping pills to get some shuteye, which nobody wants to have to take.
Unlike other sleep aids which can be harmful or addictive, you’ll experience no negative side effects from a massage, and you’ll find yourself able to fall asleep a little easier - especially after an evening massage.

For Patients with Diabetes: If you have Type 1 or Type 2 diabetes, regular massage could impact your blood glucose levels. Especially when massages happen at the injection or site of absorption for insulin, there have been marked improvements observed in lowered blood glucose levels.
Additionally, regular, increased blood flow as a result of your monthly massages can help with neuropathy symptoms that accompany diabetes, such as nerve pain. Make regular visits to your massage therapist to see improvements in your blood sugar levels, and feel like you’re getting seriously pampered, all at the same time.
Reduced Fibromyalgia Symptoms: Even after your first massage, if you experience the pain of fibromyalgia, you will notice decreased pain, but with regular massage, you will start to notice the following benefits as well:
●     Better sleep (especially after evening sessions)
●     Improved muscle strength and function
●     Improved mental clarity (as a result of lowered stress)
●     Headache relief
●     Decreased stress and anxiety
Focus for ADHD: Studies have shown that massage has been helpful in increasing focus and decreasing the stress and anxiety that can accompany ADHD, especially in children. While immediate improvements were shown in their ability to focus and be less squirmy and more attentive in class, continued massage therapy has also shown long-term behavioral improvement in the classroom.
There was also an uptick in confidence as well. If your child is particularly squirmy, regular massage may help them pay attention to what they need to be doing in the classroom, and at home.

What You’ll Feel After Twelve Months of Regular Monthly Massage:

Continued Improvements for Patients with Diabetes: After 12 months, regular massages, especially at the insulin injection or absorption site, can help Type 2 patients not only see lowered blood glucose levels as seen after six months of massages, but actually close to normal blood glucose levels. Additionally, you may also notice a reduction in the amount of inflammation you are experiencing as well.
Lowered Blood Pressure: A high blood pressure can leave you at risk for stroke and other major health complications, but it’s actually been proven that the relaxation or regular massage lowers your blood pressure. You can help keep your blood pressure in check, all while enjoying the rejuvenating benefits of massage, with regular sessions with a skilled massage therapist.
Additional Health Benefits: Other ways that regular massage can help improve your overall health? With improved blood flow comes improved immunity, making you less likely to pick up to cold that might be floating around your office, or at your kids’ school.
Are you training for a race, or spending a lot of time at the gym or in a pilates class? After an extended period of regular massages, you may also begin to notice an increased range of motion.
Because you are repeatedly reminding your muscles to relax and repeatedly releasing tension, you may find yourself feeling a little bendier in your yoga classes. Tense muscles make it much harder to find your full range of motion, and happy, relaxed muscles support an increased range of motion.
It’s not just one day a month to splurge on sixty to ninety minutes of pampering. Regular, monthly massages will leave you feeling healthier and happier, and truly make a difference in your overall well-being. 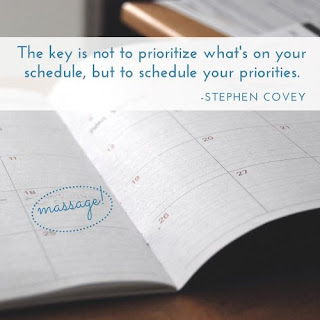 Popular posts from this blog

August 17, 2013
6 Tips for Active Aging Everybody talks about active aging, but not everybody knows what it’s supposed to look like. Working to stay happy and healthy as we get older shouldn’t be a drag, something done to slow an inevitable decline into decrepitude. Some things get better and better with age! While the grocery store magazine rack offers all kinds of tips for getting a bikini bod or looking 20 forever, there’s not much actual health advice anyone ought to be taking. So here are five tips for keeping active with each amazing birthday. 1. Keep moving, in whatever ways work for you. Don’t limit yourself. However you choose to stay active, make sure it’s something you enjoy. Being miserable while you move is not a great way to stay motivated! If being happy in motion means finding a salsa dance partner who can keep up with you all night long, don’t worry about the fact that the rest of your friends are more into yoga or golf. Don’t let assumptions about your age keep yo
Read more

Massage is a necessity diguised as a luxury.

August 14, 2013
I've found that over the last 2 years of being a massage therapist that many people are under the impression that massage is only a luxury item.    The type of work I do is geared toward relieving pain. My goal is to break long term pain cycles for my clients, whether it be from a long term condition or a more recent injury. I firmly believe massage therapy is a necessity for everyone to help us cope with our daily stresses. The Benefits Of Massage What exactly are the benefits of receiving massage or bodywork treatments? Useful for all of the conditions listed below and more, massage can: Alleviate low-back pain and improve range of motion. Assist with shorter, easier labor for expectant mothers and shorten maternity hospital stays. Ease medication dependence. Enhance immunity by stimulating lymph flow—the body's natural defense system. Exercise and stretch weak, tight, or atrophied muscles. Help athletes of any level prepare for, and recover from, strenuou
Read more

September 08, 2014
Did you know that September 14th is National Hug Your Hound Day ? It is.  And while I am all for a day dedicated to the greatness of dogs, the truth is these companion animals are so good to us, and good for us, I think that they really deserve to be celebrated every day. Archaeological and genetic evidence indicate that our canine companions evolved from wolves .  Over tens of thousands of years, the individuals best suited to living amongst us – those who had a taste for our food scraps, who were not too afraid approach us, and who were best able to trigger our affection – selectively passed on their genes, thereby strengthening those traits.  Later, once dog-human companionship was established, humans took active control over their breeding to develop traits that made dogs even more sociable.  Other dogs were bred to help us herd animals, or to hunt.  Humans and dogs became interdependent. Dogs – and the wolves they descended from – are profoundly social animals.  To survive
Read more